skip to main | skip to sidebar

Art continues when the soundtrack ends. 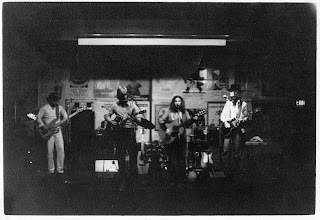 I put myself through college on scholarships and playing music at night in venues all over Oregon. Music performance began for me in a coffeehouse down the street from Ashland's Shakespearean Theater when I was 15. Singing was a familiar way to socialize after growing up singing descant to my mother's coloratura soprano. I am and will die a harmonizing machine who can track intervals like a bat using sonar. (Even Deafened, I anchor onto a visual cue to pitch or the left hand of the rhythm guitarist and know by muscle memory where my position has to be. It makes for wicked party tricks with hearing friends which admittedly pleases me in some perverse way). I played with Emy Phelps, then Chris Miller and crew, pictured above in our early band Frankly Scarlet in the late 1970's. I loved music, but I was not cut out for the male climate of the music industry, with its penchant for booze, drugs and behavior that left kids stranded on the road of parental pursuits. I had an early and dreadful wake-up call, chose to clean up my act and worked at becoming present, to bring shared music into my children's lives as the first and main priority. Music is a friend not to be taken for granted. It can keep others alive for a lifetime and longer.

I found plenty of ways to swim the rivers of sound along the way with back-up vocal and guitar work for a variety of bluegrass, newgrass, folk and country performers, including Baila Dworsky, and others. Happily, my family could be part of this world, where singing stretches its arms equally around sorrow and enchantment. . 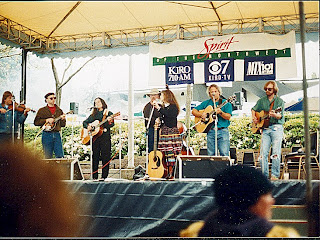 There is a joy to rich harmonies that ripple outward from some visceral connection into clouds of sound. Sing with others and they remain kindred whether personalities fit or not. One of the above band members from the 1970's turned up a few years back fighting cancer which was threatening his sight, and got in touch after learning I'd been Deafened. What I know is that we all change with time. We keep nothing as we fade but people who remember us and encourage us that none of what changes is really personal. We let go of one precious thing after another, moving toward our personal horizonline, like sunlight, slipping up or down with timing ordained by larger forces. A few days ago, musician Mark Bosworth went missing during Cycle Oregon and has been the focus of a statewide search, as his condition appears to have worsened, causing diminished capacity. His family struggles to find him and he has simply vanished. He was a tenor whose love of harmony characterized his backup guitar riffs and vocals from folk rock to choral music. Backup work was a particular niche in the field we both understood and were best at. One of his favorite songs was "Home", recorded by Bonnie Raitt, and tonight, Deafened or not, I will sing this tune again as a prayer that he will find his way Home in the Way the universe deems best.
Posted by antonia lindsey at 11:23 PM No comments:

Art is nurtured in tribes. An early tribe of mine was Four Winds/Westward Ho Camp, where sailing, art, music, dance & community shaped summers into times of magic. Carlyn Kaiser Stark hired me as her youngest staff member and I went to work teaching art & dance as a teen, learning to sail a variety of watercraft and writing music for newfound friends. My life was transformed by the wonders of the 1907 schooner Martha, and the embrace of talented people gathered to share a love of the water and woods.

It was a world apart. We lived in tents learning the ways of the sailing community & power of song and tradition to unite a group across generations. After 43 years, I have reconnected to find that the sails of creativity hoisted there have helped some of us ply the winds of change up to the present.

he was a patient, engaging teacher with a thoughtful nature and buoyant goodwill shown towards all. He was the kind of person who didn't forget the little kids, the awkward kids, the ones that hadn't found their spot. He led a band after evening chores, and those of us who played would jam late into the night, our songs carried across the sound of Orcas Island. I found Scott again because of his recent book, "Enlightment Incorporated: Creating Companies Our Kids Would Be Proud to Work For", which invites American businesses to transform the tumult of current economic reality into enterprises that can sustain our future and give our children a livable legacy. This fits the person I remember who introduced young sailors to the thrill of a boswain's seat blasting its arc across open water while when heeling hard over into the sunset in the Straits of Georgia. From Scott, kids learned to man the sails and maintain headway, pitching in, instead of staying passively on the sidelines. He could see the wind on the water ahead, and still does.

And I am still who I was, one who senses the current below the waterline, navigating by internal radar for relational maps with others. Then with songs, now, with concepts for helping people reconnect to the art in their hearts which like the Puget Sound, is a current deep and wide and led by larger seas of change. Although we became friends as musicians, the true north of my compass remains art. Wind and water and hardship has made each of us better people, more equipped for standing up for what is sensible and humane, even if this happens only one channel at a time. An old saying goes: "You can't change the wind, but you can adjust your sails."

What tack are you on with the creativity in your life? What beauty do you leave in your wake?
Posted by antonia lindsey at 6:25 PM No comments:

Art met the deep current of a tide that has reached across time.
A recent windfall of finding my former mentor led me on my first trip north to the Puget Sound in 6 years since the surgeries and Deafening. I live landlocked as I get very dizzy from even a 30 mile car ride. I braved it for 2 reasons. The Wooden Boat Festival is my mecca and my mentor in the same town is now 77. It had been 42 years, a lifetime, since I worked for her as a young teen, painting and teaching art at her summer camp where I learned to sail on the Schooner Martha which graced the camp harbor. It was a privilege to attend the Lifetime Service Award ceremony of a woman whose life on the water and dedication to the art of sailing has inspired thousands of people: Carlyn Kaiser Stark. 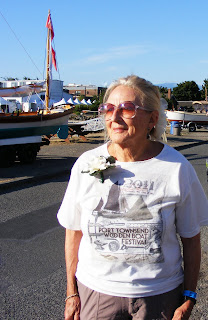 The schooner Martha went through what happens in many women's lives: she's been rebuilt from the bottom up after a dreadful stove-in in 1976 and LIVES again! I had to see my mentor and the boat that changed my life. So, SeasickOnLand went north with hearing hubby to the worshipful company of Boaties (maybe I mentioned along the way I had lived aboard with a former husband of 16 years and our 2 children, who were raised on the water). After that life crashed in a sad ending 16 years ago, my long oar now holds up raspberries in the vegetable garden. The ocean lives in my head because of the fluid imbalance of broken calcium ion channels that destroyed my balance and hearing assigning me new citizenship as a Deafugee. Now I sketch my obeysance at Martha's bow. 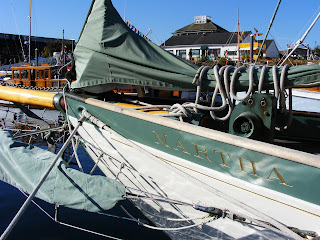 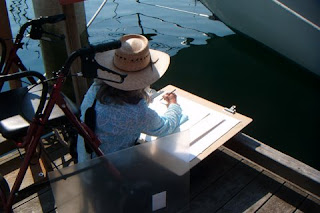 While inching my walker down the piers, wobbling and weeping over renewed connection to the watery world, my husband fell for a classic old motor yacht, Shamrock, and "had to have me come see it". Parking the walker, I clutched the ladder, entered the companionway to see the face of a lovely, bright eyed woman with an intense look, signed her a hello, and we "clicked" in immediate awareness of a strange connection. She said "You are Deaf? I just got back from ASL immersion conference. I am HH and doing research on Late Deafened people."
We agreed to meet on the pier after hubby and I toured the vessel. Once back to the pier, she and I hit the deck and dove in to discover that
each of us are recent recipients of..(wait for it)...first time scholarships to the same Association of Late Deafened Adults Conference in Indianapolis! She is in Canada, I am in the States. Her first Wooden Boat Festival, my return after 16 years. Hundreds of boats, over 4,000 people a day. Okay, math geeks, what are the odds our paths would cross as the two dizziest deafened women at a boat festival? 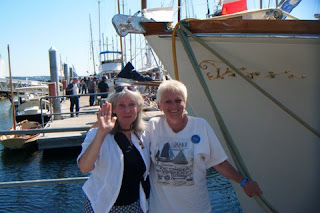 There is more to the deep current of time and tide that we know. Physics is right. There is something that accounts for the unusual strong connection between things, and though we can only recently identify it, some of us have staked our lives by that magnetic north. I say: "The Universe is Wiggly." I am blinkered with happiness but back to horizontal here, still paying the dizziness & nausea tax for the trip. No matter, "Shamrock" the motoryacht brought me and Deborah our pot of gold. And Martha? She led me back to Carlyn, who is one of the true treasures of West Coast Maritime history!
What are the winds of time blowing back into your life these days?
Posted by antonia lindsey at 10:51 AM No comments: 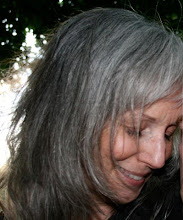 antonia lindsey
I am a professional artist & registered art therapist. I've made artwork since I was a small child, and worked in therapeutic arts for over 25 years. What works better? It's like breathing. Art is air. I am Deafened by Meniere's Disease in adulthood.